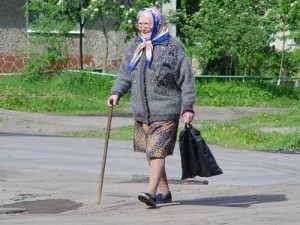 The meaning of this came to me when I met a neighbour of mine.

I had known this lady by sight for the twenty years I had lived in my road. She is an older lady. I put her at about eighty.  I would see her out on her bike, walking her dog, and delivering leaflets and letters from our local member of parliament.

I spotted her occasionally at meetings of our local historical society. I say occasionally. She was probably always there, but she is tiny you see. She only came to my notice there once, when she gave a talk on a particular area and aspect of our town.

Just one time only I spoke to her. It was cold, maybe snowing, and she was marching along with her dog or her leaflets, I don’t  remember which. ‘Aren’t you freezing?’ I asked. ‘Oh, not as long as you keep moving…’  she replied.

Then, one day a year or so ago, I saw her in her front garden. I walked that direction to my home as often as I walked from the other direction, but I had never seen her before on that route, and had never had any idea where she lived. Never given it a thought .

And from that moment – eighteen months ago – we became friends.

‘So this is where you live,’ I asked . We exchanged names, exchanged telephone numbers, had tea a few days later. Now we meet weekly or more often, have been on days out together, enjoyed visits to cinema, theatre, and musical events at her church. And even  been on holiday together.

Now I see the meaning of, ‘Who’s she when she’s at home?’

Your home is what grounds you. It s where people can find you. Where post can be delivered to you. It is part of your official label:  Name Age Address. Your identity.

(Age? Turns out she is not eighty but ninety-six, and only gave up the bike last year. The dog had died just before I met her properly, but she still managed to replace the dog walking with an exercise class)

I once read Arthur Miller’s The Crucible: a set book on a course I attended. It was an adult education course, with no public examination at the end, and I did not get the opportunity to say what I felt. Maybe I thought it was a bit off beat. I knew it was about a witch hunt but I finished reading the play believing there was something else to it. Something perhaps more fundamental, more every day, more permanent to all human beings. After all, we are not always living with the persecution of witches around us. No, I came away from that work with a strong feeling that what it was really about was Name and Place. Name: family. Land: place, home.

When you think I had seen this lady walking through my life at least once a week for twenty years! I never went up to her, walking the dog or delivering envelopes, and asked her her name or where she lived. I did not even approach her after she gave that talk at the historical society and say, ‘ I think you live in my road, don’t you?’  I actually never assumed that she did live in my road. Many people walk through our lives from a larger, main, road.

I could have spoken to her, of course I could. I guess some neighbours do introduce themselves to people who they see walking in their road. I am not generally unfriendly. Maybe she was always on the other side of the road. She always seemed very busy. And she still does actually walk quite fast!   It may have been that, when I saw her in her garden, I did think so this is where you live. So this is who you are. The lady who lives here.

So do home and place constitute identity? What of the homeless and displaced? The rootless? The wanderer or gypsy? For some I think their group, their family, their religion is their Place. (And their caravan, too.) And some do not want place. Being fixed. Some see being confined as a restriction. A defining of their self. Place and identity entwined.

Roots. Is it about roots? The roots of your family name and the land your family owns, or has always inhabited?

There is a struggle between wanting roots and not wanting them in one of my short stories: the short story called ROOTS in my collection of short stories, REASONS. The first line of the story is: –

‘I have no roots’ he said. ‘I have nothing to show for my life.’