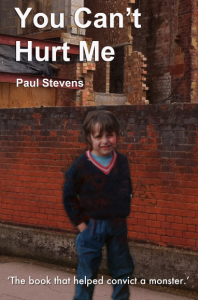 You Can’t Hurt Me

To call myself a writer and know that there is a book out there with my name on it is never anything I could have imagined earlier in my life. If someone had told me then that I would have a book published, I would have laughed at them. As a child just getting through the day was tough enough for me. The obstacles and minefields I had to negotiate made learning at school something of a non-starter. Listening and taking in what is happening all round you still happened to me, but not inside the four walls of any school I might have spent the odd few hours in on my way up to adulthood. Early on my young life was just a screenshot of lies and deceit perpetrated by those who were supposed to be in the role of caring for me. My mother, step-father and social worker were inept in every conceivable manner. For me out of sight was truly out of mind. I was branded ‘troubled’ at school, or a ‘problem child’ as they used to then call us. My class position was to be at the back, with the other problem children.

Sport became my thing, and I excelled at it. Anything from football, running, cricket and boxing. I would never be spelling my way to the top, but I could run, and by the time I was twelve there were few who could even compete with my speed, let alone beat me. I was one of the top youth runners in the south of England. When my mother told me I was useless, she was actually issuing me with a challenge. I won county and inter-county honours for Surrey and even ran for a young England side twice on tour in the south of France, finishing in the top three in both races.

My movement towards the hallowed status of writer took another turn when I became a father at 21, far too young, but I soon became dedicated to my son who went on to achieve at the top level in sport and business. We shared all the wonderful experiences that life could throw at us, and our memories together soon began the healing from what I had experienced as a boy when I was his age.

I began writing in 2007 when my son moved to the USA to pursue his career in MotoCross, and focused on my memoirs to help me with the loss. This became my first book, ‘You Can’t Hurt Me,’ which is now available on Amazon as an eBook and will shortly be available in paperback. I still struggle with spelling, but my iPhone has been a great help in that area as anyone who has one will understand. I write how I talk, from the heart, allowing my life experiences to mould my style.

I have had help with putting my book together from a friend I met at my running club back in the 1990s, who has helped me get my book published. As you will find out if you get to read my story, probably the best thing of all about it is that my recollections and revelations about the abuse I suffered at the hands of a serial child abuser meant that in May 2021 this man was found guilty of 31 offences against others like me, and is now in Belmarsh prison where he will spend the rest of his years, no longer a threat to children.

I hope you get the chance to read my story, and thank you for reading this.