Women of the World Festival 2016 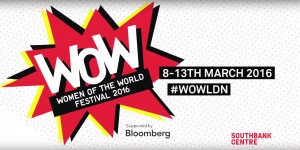 Jacquie Lawrence was one of the five women writers playing to a full house in the Weston Roof Pavilion room as part of a Polari event at the WOW Festival (Women of the World) at the Southbank Centre in the Royal Festival Hall, hosted by Paul Burston.

The women writers on the bill featured Mari Hannah (‘The Murder Wall’) who won the Polari First Book Prize in 2013. ‘The Silent Room’ is her latest effort which she was at the Festival to promote. Jacquie Lawrence (‘Different for Girls’), Janet Ellis (‘The Butcher’s Hook’) and Veronica Fearon (‘Danny Fenton’) were also discussing the issues in their books depicting queer life in contemporary literature.

The festival, which is in its sixth year, celebrates the work of women in a week that began on March 8th with a celebration of International Women’s Day. The Polari element of the Festival celebrates queer characters in modern fiction, poetry and drama.

The Polari First Book Prize is running again this year for its fifth year, with an entry deadline of May 1st, and Jacquie’s book ‘Different for Girls’ has been submitted for the First Novel prize.

Dusty Springfield’s ‘You Don’t Have To Say You Love Me’ was used to great effect to bring the excitable crowd to heel and allow Paul Burston to open the evening.

Jacquie spoke third, after a recording of the prologue to her book, read by actress  Heather Peace, was shown to the audience. She described how she had felt moved to write a novel depicting life in west London for Lesbian married couples in the early twenty-first century.

Jacquie’s book had a high profile during the evening and copies sold well on the night on the front desk. All in all it felt good to be present and a part of the festival.