TO BIN OR NOT TO BIN? 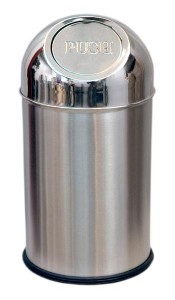 Sitting in a hospital waiting room recently, I decided to visit the Ladies before my appointment.

Sitting on the loo – please excuse me, but part of the story – I looked at the large bin in front of me. We are all familiar with bins plastered with notices about hazard waste, I think.

This bin however had such a big label across it, which I read, astonished at the long list of things which could be put in it, and a further list of what could not!

I am sure my eyes must have been spinning in the way of the old cartoon characters.

What was astounding, but also hilarious, was that there was a telephone number with the instruction to ring if you had problems about the use of the bin!

Nobody would read to the end of those lists. They were far too long. Most of all, it reminded me of one household cleaning product I once purchased – and indeed I think many every day items are similarly perplexing – a little green bottle of liquid boasting two lists like the waste bin in the hospital loo. A list of what surfaces you could clean with this green bottle’s content, and one which you definitely should not.

Too much to read through. You would lose the will to live, as the cliché goes. Well, certainly the will to clean. Good excuse not to.

I guess the detergent company was only covering itself should any wayward housewife ruin her marble wash stand with it – or her gold bathroom taps !

The label on the big tin bin in this toilet did at least give me amusement as I waited for my medical appointment. I pictured some woman calling that number to ask what she could do with her tampon!

I told the story to a friend and when I ended with the question about the tampon, she retorted, ‘I would have just put it in there anyway!’

I am not sure what Brenda in Neverland would have done. Certainly Mary would always obey instructions, whereas Brenda as a rebel would probably not.

The heroine’s best friend Tilly, from Lips That Would Kiss, one of the stories in my collection Reasons, is a law unto herself, and not without humour, would inevitably do something unspeakable when faced by the situation with the bin. She always has a snappy, clever and amusing comment to offer about Maggie’s problems and encounters – especially the sexual ones.