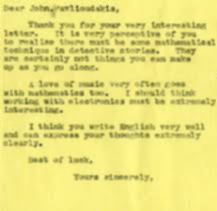 This is the first time that I have wanted to reply to The Author.

It was the editor’s letter which drew me, and words like author’s voice… authenticity. I was going to add genius to the list, but just now on the third reading I find the word is not there. I will pretend it was.

It was when I was reading English Literature for my first degree that the link between the words author and authority first occurred to me. It was pointed out that, when we say Shakespeare said this or Dickens said that, we have to remember it was they who said it. Not God, or whoever carves those tablets of stone… (Sometimes when we quote an author, anyway, we are quoting words spoken by one of his characters, not him.)

The voice most railed against me has always been my own; and that is fuelled by genre demand. A literary writer, a writer of poetic prose, and told by one tutor when I took a Master’s Degree in Creative Writing that I am really a poet, where is my market other than small publications which do not pay? My critics, I suppose, have mainly been women’s magazine editors. They flatter me by commending my story, describing it as thoughtful, beautiful, poetic or full of lovely imagery. Then tell me that such is not for them. Or they criticise. The tale is either not believable or else predictable. Or it has been done before.

I think what some critics and editors may have lost sight of is the concept of story. And also of genius.

What does it matter if a story is unbelievable, predictable or has been done before?

Most of Shakespeare’s plays were re-works of old, old stories. And the first author to write about a hi-jack had his book rejected, ‘because it could never happen’. Of course it happened the next week. Or the week after.

A famous author once came to judge the competition of the little writing class I attended. (Yes, weren’t we lucky? She lives in my area and was friendly with the class teacher.) She told one contributor that her story was too sentimental, and another that an incident in his was a bit unlikely. The first of those won the story competition of one of our top women’s magazines, and the other was published by a newspaper. I am not complaining. I won the first prize that day, but that story has never sold, though I have woven it into my recently published novel NEVERLAND.

Now I have arguments with people about the existence of genius. Though they are not artists of any kind.  I have had it said to me that there is neither talent nor genius in art – or sport – only hard work.

Hurt by this, I have asked around. A young man writer says it is persistence rather than hard work. I would go along with that. I have been writing for forty years trying to get recognition for my own voice. But I also asked an older lady who has made her living through her painting, and her reply was that genius is the thrust which makes you do something in the first place. Indeed. For why would you set out to write, paint, compose music, play music, sing, choreograph dances, dance, run, swim or anything?

(On being asked by me why he became a painter, a friend replied, ‘Well, I did not have a piano but I did have a box of paints.’ I suppose that comes into it, too.)

My argument for genius is that my stories write themselves. I know many authors plot, but that is not how it works for me. I have rarely written to order.

If, in the middle of a non- inspired patch, it is suggested by my friend as we drink tea in a café that I, ‘write about a café’, well, nothing will come of that.

The stories I have sold have usually come into being because I have seen something, someone has said something, or I have had a preoccupation with an idea. I wrote the first line, and the rest of the story wrote itself. I remember once writing in a state of wonderment. A man had related a sentence to me and I thought that must make a story. I went home and wrote out the sentence. I really did not see what on earth could happen next. A second sentence came. And then the story ran away with itself.

That was the one which has been enthused about by a magazine editor, who then added it was not for them. It will now, at last, ‘have an airing’, as another of my creative writing teachers used to say, in my next book to be published, which will be a collection of short stories entitled Reasons.

My point though is that it is hard for me to please the critics or write for the market.

I can only write what is me and hope – wish – that someone will like it. Enough to buy it. Buy more.

I just wonder though if critics and editors really know what people want.

Once upon a time I was working in a large store. Single parent, four children spread out in age, selling the occasional story, and fitting the degree in English Literature around it all.

It was in one of those slumps, when work was not easy to find. One young man on the shop floor clearly wanted to impress and, even if not move upwards or sideways, at least keep his job.

I heard he travelled miles over hours to get there, and the same back, of course. He strutted around looking busy and energetic and beyond reproach, unlike me, who was observing him. Not like me and a fellow worker, who chatted from time to time. She was a young girl and she lived with her auntie. They watched soaps on television in the evenings.

We looked at the robot man and I said to her I thought that, when he went home, he took the key out of his back and shut himself in his cupboard till the next morning.

The following day, she told me that she and her auntie had spent the evening laughing about my ‘story’.

Just as I was wondering what to say in reply to the editor’s letter this month, I was re-reading an old favourite of mine, who is currently being republished, Jane Duncan, who wrote the My Friend books. I had managed to find a copy of her autobiography, Letter From Reachfar. How fortuitous that, in the midst of trying to dream up this offering, I read her words, ‘a writer is a rogue who is outside any and every group, even the ’group’of writers’. Fortunate, and funny too, because earlier this year at the launch of my publisher’s new company I asked him why he took me on, and he replied, ‘because you are a maverick’. And how can we please any critics when we none of us fit a mould?

The author’s voice, the author’s authenticity. We write as the spirit moves us.

I once sent a story to a magazine. They loved it, but wanted me to change one passage. I duly made the change but they still did not want it. Why? Because it had lost its momentum.

Well, what a surprise!