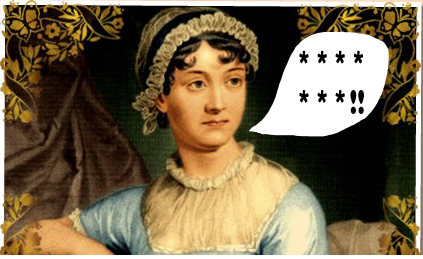 A friend last week sent a card featuring Jane Austen with her publisher who is saying “We like the plot Miss Austen, but the effing and blinding has to go.” I’d seen the card before but was struck by Cilla’s comment that the card seemed somehow apt for me.

I have been slightly worried that the opening chapter of ‘Knowledge Waits’ is narrated by Gerry, whose language is largely demotic, so much so that at one stage in the novel even he is struck by the fact that he hasn’t sworn during a long and particularly painful reminiscence. The very first word of the novel is ‘Fuck’ and, given that the free sample offered by Amazon is the opening, I wonder if anyone has been put off, concerned that the remainder of the book is a torrent of gutter language.

It’s possibly a touch twee to be worrying about what I hear, and indeed use, on a daily basis. I have no problem with my / Gerry’s heavy use of the profane; it characterises him for what he truly is, and by opening the novel with him my intention was to kick-start the narrative with this Rabelaisian and, with any luck, largely unforgettable character.

It just means that I shan’t be choosing a passage from one of Gerry’s chapters should I be asked to read a section in the next few weeks when I appear on daytime local radio.