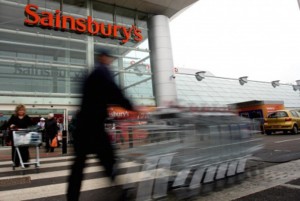 Today I wasted a good half an hour running round Sainsbury’s, trying to think what I wanted to buy which might cost 20p, to make my bill up to the next pound, as at that point it was £8.80. The reason for this is you only get awarded nectar points for the first £9 you spend in the store. Every time I do it, I know it is daft, and after today I swear I will never do it again.

In the light of eternity, how much is my precious time in this life worth? My first husband – when we were very poor- threatened to go and roll half a crown down a drain in the road if he ever saw me scraping and scraping at butter paper, to get every invisible trace of butter off. He said my time was worth more than that amount of butter.

Have you ever run round a shop at Christmas time trying to find a third gift in the three-for-the-price-of-two offer? And then you have no one to give any of them to or, worse, you are giving presents you are ashamed of?

In a famous toy shop, there used to be an offer to give you a free second one for any toy you bought. So two teddies for the price of one teddy. A young mother at the time I know took the second toy every time – until she found she had a cupboard full of toys she did not know what to do with.

The thing is, the bargain does not change your life. Or make you rich. Or even make you better off.

I can see my poor old mum now, coming in to me and saying this or that was two bob off this week. As though she had won the pools.

As though it bode for better, richer and brighter times.

Of course in the week that something is two bob off, probably quite a few something elses are a few pence more.

In NeverLand, money is a very big issue for one of the girl’s families. Life is a constant struggle just to get the basics. Some readers can’t believe that there were people in that era who actually found items like underwear beyond their grasp. I can assure you that there were. Housekeeping was for food, and to buy clothes for a lot of children was almost an impossibility.

There was no credit card. What you could not buy with cash, you could not have. I have heard the criticism, about a mother of that generation, that she was a ‘bad manager’. So she needs to be a financial wizard, as well as washing, cleaning, shopping, cooking, washing up, ironing, mending clothes… and just having babies and children either round her feet or needing to be taken to school? I would have thought that enough pennies, to do the job she has to do, were the basic tools of her trade.

Brenda’s mother does treat herself out sometimes – a quick pop in to see a film, a cup of tea in a café.

But… well, read her and see how bad her time-off is… or how justifiable.

All this from me and the nectar points. Every time I do it, I forget what I am remembering now –

That each point is probably worth a farthing!!