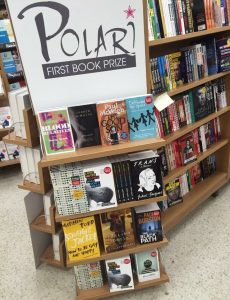 Now in its sixth year, the Prize is awarded annually to a writer whose first book explores the LGBT experience, whether in poetry, prose, fiction or non-fiction. The six shortlisted titles are:

This year’s shortlist draws a spotlight on the increasing breadth and diversity of works focusing on the LGBT experience and demonstrates the remarkable candour and breadth of talent of the LGBT literary community.

Fiction features strongly – from Anne Goodwin’s poignant midlife coming-of-age (Sugar and Snails) and Jacquie Lawrence’s exploration of love through the entangled lives of six women (Different for Girls) to Paul McVeigh’s funny and frightening story of a young boy navigating the troubles of 1980s Northern Ireland (The Good Son) and Stevan Alcock’s unforgettable tale of teenage life set to the backdrop of the Yorkshire Ripper murders (Blood Relatives). The shortlist is rounded-off by Juliet Jacques poignant memoir of the transgender experience (Trans) and a raw yet moving collection of poems written in celebration of the masculine form (Physical).

“From an exceptionally strong longlist, we are delighted our strongest ever shortlist of books which successfully highlight the range of experiences and talent in the LGBT literary community. Since we began this year’s judging process the world has turned on its head. At a time when it has never been more important to draw our similarities over our differences, each book chosen gives us all insights into other worlds; a sense of what it’s like to walk in another’s shoes. Choosing a winner will be incredibly challenging.”

The 2016 prize has been judged by a panel comprising of chair Paul Burston, author, journalist and host of Polari literary salon; Rachel Holmes, author and former Head of Literature & Spoken Word at the Southbank; Suzi Feay, literary critic; VG Lee, author and comedian and Alex Hopkins, writer and editor.

For further information on the prize, visit www.polariliterarysalon.co.uk.

Tonight’s winner will be revealed at the London Literature Festival on Friday 7 October, 2016 at the Southbank Centre.

We are hoping Different for Girls marks a first prize achievement for Jacquie and Zitebooks. Information TBC the moment we know it!
www.polariliterarysalon.co.uk
www.twitter.com/PolariPrize