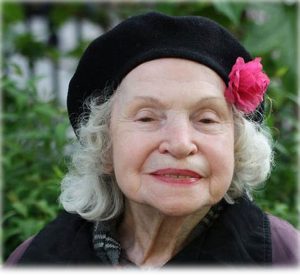 My youngest daughter, once said to me, ’I would eat anything. I’d even eat you!’ She curiously later developed a phobia about Baked Beans. It got to the point where you couldn’t even say those two words, never mind show her a can. So in the event of the world’s end with nothing but me or a tin of B… B… to eat, I’ll know my fate, won’t I?

I have always said I could not eat a person. Could not possibly eat a human being. But something happened this year that made me wonder whether that was actually true.

As well as saying I would never eat a human body, I have also always said that I would never wear an old lady’s woolly hat. My mother wore them. I would come home from the shops with my children and sometimes find that she had let herself in by the back garden gate and was sitting on a garden chair waiting for us.

As soon as we got to my glass-panelled front door we could see straight through to the kitchen door, which also has a glass panel in it. And there would be the woolly hat.

My son asked me in those days, ‘Mum, when you grow old, do you grow a woolly hat?’ So you can see why a woolly hat meant, and still means, being old to me.

But here is the story.

It was more or less the end of winter, almost the beginning of spring, when my friend, who lives just round the corner, rang me to see if I felt like going out. A long bus ride, followed by a walk. To just get on any bus and see where we felt like getting off.

The end of winter and signs at least of spring were clearly making her feel a bit adventurous and as I had been a bit under the weather, I jumped at the invitation.

Just what I needed; something different and it certainly looked bright and sunny outside. It was early afternoon and we had both had our lunches, so I quickly got ready and walked round the corner.

But not half way there and I realised that, bright and sunny or not, it was in fact still cold. Very cold. I had not discarded my winter coat and gloves. No, it was my head which was unbearably cold, maybe because I had been under the weather.

I didn’t want to go back and keep my friend waiting. But, as I walked feeling increasingly cold around the head, I found myself struggling with an impossible dilemma. Be cold – or ask to borrow one of her hats.

What’s the problem you might ask? Has she a larger head than you, or maybe smaller? No, that was not the problem. Apart from the fact that I am not much of a hat person, rarely finding one which suits me, managing with hoods and scarves and things I suppose, she is more than twenty years older than I am.

The woolly hat loomed in my vision. I had always dreaded what I called the old lady woolly hat. Had vowed I would never wear one. But when the crunch comes, or the chips are down, well, you find out what you are made of. As I knocked on her door I had already decided I would wear an old lady hat rather than be this cold. My friend, already buttoned into her coat with her own tea cosy hat on her head, went straight upstairs in her house to see what she could find for me. (she is in fact very short, so her head would be smaller)

She finally appeared with something scrunched up in her hand, saying, ‘I found this at the back of my wardrobe. I probably haven’t worn it for forty years.’ It was a beret. A lovely, soft (maybe angora) beret and in a shade of what you would call Oxford blue, a fairly light blue, and very much one of my colours.

I don’t know if you’ve heard the saying that if you give up everything, it will all come back to you. Well, I had given up my desire to hang on to my youthful image, hadn’t I; the image to which I had been so relentlessly clinging, as my own years had been advancing…

… and I didn’t have to. There I was, out for the afternoon, in a softly pretty beret, that timeless, ageless design.

So now I have to accept that, if I had decided that I could wear the hat, I could maybe eat the person.

We had a nice afternoon. And, at the end of the day, my friend said I could keep the hat.