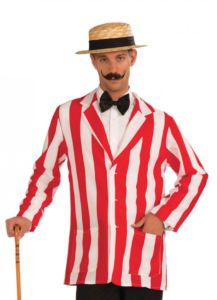 When we had just returned from a two week’s holiday, my husband of a year – and you can see why it was not much longer – asked me, ‘Have we got any bananas?’ ‘Where would we have got them from?’ I replied. ‘Before we went away,’ he said.

Holiday. Summer holiday. Like – hot weather? And how un-mouldy would they be now, I thought. Afterwards, I was to fantasise that I conjured up a straw boater and cane and began dancing and singing: ‘Yes, we have no bananas.’ And that he joined in and danced and sang too. And then it all would have been happy ever after.

‘Are we then so serious?’ questioned my favourite poet, T.S. Eliot. We are all just playing games down here, aren’t we? What a lot of spoiled brats we must look to more advanced civilisations on other planets. In my beloved Gilbert and Sullivan, if you got to marry the old hag instead of the village maiden, you danced and sang about it. Gilbert wrote, ‘What though distant shadows fall, Sooner, later, over all? Sing a merry madrigal!’

That ‘husband’, and possibly lots of other troublesome people, are surely examples of spoiled brats (Why did he not check out the banana situation himself, before we went away?) who somehow manage to get power over people, whether in the domestic scene or over Nations. I am sure that one person, at least, must come to mind. I have mentioned my wonderful aunt, who finally died last year at the age of 103. She followed the Brexit Campaign and had strong views about it. Right to the end of her life, she read a newspaper every day. When those awful beheadings were publicised, she said to me, ‘I don’t understand it. Why doesn’t somebody just shoot them? I used to think, in the war (when she would have been a young woman with a baby) – I used to think, about Hitler, ‘Why does someone not just shoot him?’

They used to say about a badly behaved child, ‘All he needs is a good slap.’ Or maybe just a merry dance. Be given a strawberry striped cane, like a stick of rock, and a straw boater, and have his hand taken in dance. Life is misery enough. But, again to quote Gilbert, ‘Then let the throng our joy advance, With laughing song and merry dance.’

For, as more than one person has said, in different words * :

Maybe having bananas, or no bananas, is much the same thing. In the end.

Listen to Pamela’s story ‘Roll On Tomorrow’ now by clicking this link.

Pamela Pickton‘s novel Neverland is on sale on amazon now, and on all good ebook websites, and read about her travails and worldly challenges in her Zitebooks collection of short stories, Reasons, which is also available to download from Amazon..