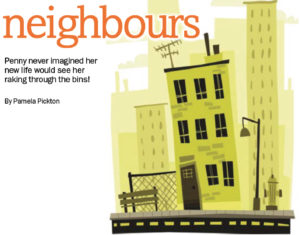 Oh, she couldn’t have put it in the bin, could she? Not in the massive landfill bin – outside, in the flats’ private car park, next to the separate bins for cardboard and things. How could you possibly ever find anything in there? But, yes, she had emptied her kitchen bin out there this morning. Penny peered down into the newly lined bin, hoping she had put it in there later. Nothing but the clean liner. Why would she have thrown the strip of pills away, anyway? Penny had put them by the computer. She found it easier to reorder prescriptions by email. She must have forgotten there were two left, and she could not manage without them for the two days it would take for the prescription to be ready.

Just mild anti-depressants, to help her sleep. Since her divorce and her move here, to these flats with the recycling bins outside. She missed her old house with its old-fashioned dustbin. Oh, she was all right now. It had been a couple of years ago and life was settling down. Penny had seen it all coming long before it happened. She had not moved far from her old friends, and her children lived nearby too.

Still, pills like that take a while to wean yourself away from, don’t they? And you have to be careful not to do it too quickly… Although she was settling down, she was disappointed in the flats. It was only a small block so she had assumed that all the residents would be close, all help each other – become what she understood by ‘neighbours’.

Yet it wasn’t like that at all. Most of the flats were rented, often for a very short time, by young single people as their first stage in becoming home owners. When she had first seen the building she thought how pretty it was, in a tree lined road, with rustic brickwork and sash-style windows. It reminded her of the block of upmarket retirement flats where an older friend had once lived. Yes, it had looked like the kind of place the over-fifties might choose. She had forgotten what she had realised long ago: that things are never what they seem. Always people were coming and going. She had watched a young girl, a week or so ago, being moved in with the help of her father. He was helping her carry in boxes. She saw a lot of that.

At first when she saw a man of similar age to herself moving stuff in, she had believed it to be a new neighbour. But she knew by now it was always a father helping young family members.

Well, she could not manage without the pills. So what could she do? Go to the surgery on bended knee?

She was too busy really, getting some ideas together for the Discussion Group tonight – the one thing of interest in the area she had found so far. A small group, and nearly all women, but you never knew. You never could tell. Was it worth a peep down into the landfill bin? Would she fall in? it was usually filled with nothing but kitchen bin liners, because of the other bins, but supposing someone had tipped in a load of miscellaneous rubbish since she had last been out there? And would she recognise her own bin liner among so many? Oh, she really should not waste her time. She would never find it.

Still, never say never. That had always been Penny’s slogan. As she walked out towards the bins in the car park, she just believed she would recognise it. Everyone must surely buy their bin liners from different shops, and there was only one kind she had seen with the grey tie.

Yes. There was one with grey ties – near the top, too, but just – oh, only just – out of reach. Could she somehow manage to hook it with her key? And lose the key? No! Hook it somehow with her mobile phone? Just nudge it, use the phone to flick it and maybe edge it up a bit. Afterall, it was not far from her grasp. Probably only need a flick with almost anything. But to risk her phone sinking right down to the bottom? She always went out to the recycling bins holding her keys, and feared tossing them in by mistake. Why not put them in a pocket? Why indeed – few garments boasted pockets these days, did they? No; there were no two ways about it. Penny would have to go back indoors and find – something. She had once had a long fork for barbecues, but no, she had not seen that for a long time. The best she could come up with was a fairly long-handled slotted spoon for straining vegetables, and an ordinary fork. In a last-minute flicker of genius, she pulled on a jacket. With pockets.

Back staring down into the bin, Penny could see what she had forgotten: she always tied her bag ties into a bow. She had to be able to hook into that. The fork did it. And there was no need even to lift the bag far. The strip of pills was right at the top. Gladly, she grabbed it and put the pills in her jacket pocket, re-tied and dropped the bag. Only then did she realise there was someone behind her. A cough. A slight laugh.

It was the man she had seen moving his daughter in. She dug the pills right down into her pocket and hoped he had not noticed what she had been fishing out of the bin – or thinking they might be for some embarrassing ailment. It’d be nice if he thought she looked young enough for them to be contraceptive pills…

“Back helping your daughter?”

It had been a week or so since he had moved her in, but she had seen him a few times and guessed that there must be quite a bit of decorating or something to do in her flat.

“I know. Most young people look like teenagers, don’t they? But she’s married and has two quite big children.”

Things are never as they seem, Penny reminded herself again. How many times had she guessed a girl to be seventeen, only to discover that she was thirty-four and had a teenager herself!

Did he look as wistful as she felt? Just a pity they had not met looking for mail!

Over tea, Tom told her that he had been suddenly widowed a few years ago and his daughter had persuaded him to move near to her and her family. He and his wife had owned a bigger country house, but the proceeds could only buy a small flat near his daughter, here, nearer London. His other two children lived fairly near as well. So – company for him and a baby sitter for them.

“I did hope I would find other company as well,” he looked wistful again, “but this place is full of kids probably younger than mine.”

They commiserated about it all, and Penny could at least tell him of the Discussion Group. She told him why she had come to live here, and a little of how she felt and how she was coping. His eyes looked kind and she felt somehow he understood. He was recognising her loss – different from his, but no less of a loss.

Penny felt at ease. Convinced that they would be friends. At least. Still, she would not invite him down to hers. Not yet. She left cheerfully, offering to introduce him to the best coffee shop she’d found and reminding him of the group, meeting tonight. Back indoors she felt a new lightness and resolved to work harder at reducing those pills.

Silly to dream? Well, she’d learned today that you should never say never.

One thing she was sure of. Tom would definitely be a good neighbour. 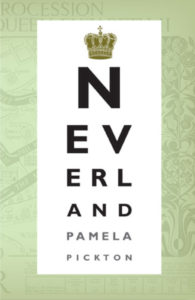