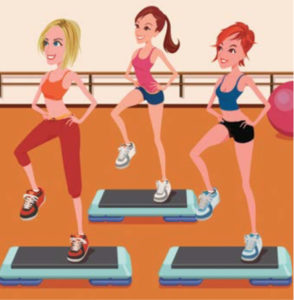 Lovelorn Laura was determined to turn her life around – with the help of a little lyrical loveliness.

“Oh, dear, what can the matter be?” sang the music as the keep-fit class bounced their bottoms on the floor. And, “Oh, dear, could we all fatter be?” sang Laura to herself. She had joined this class because it was in a handy spot for her, but it was attended mostly by older women. The instructor had known some of them for years and knew they liked all the old songs. Laura liked the tunes and her mother knew all the words. She even had some copies to lend. “In case you want to practise on your own, dear,” she said.

As if, Laura had thought. But here she was, back in the class for a third week.

“Oh, dear, what could the matter be?”

The music changed and so did the exercise. Now Laura had to try to touch her knee with her head, while humming along with the new tune.

“After the ball is over…”

No pain no gain. Well her ball was over, wasn’t it? Hadn’t it been over with Geoff for months now?

The pain of the stretch matched the crushing pain in her heart. It had been November. Then, what with the cold, Christmas and sweets, those midnight snacks when she could not sleep….

She had put on pounds.

But then, she had always been a bit of a pudding, hadn’t she? Perhaps that was what had sent Geoff”s eyes roving elsewhere. Not that she expected this class to work miracles. It was just her Wednesday afternoon off, when she used to meet Geoff Just a filling in of time. No other reason.

Next week, she was no lighter. She knew she had not tried. Yet, as they circled the room to the sunny side of the street, there was a new lightness in her step. There was an exhilaration, a letting go, as they were told to take in deep breaths and fling their arms wide.

“A spoonful of sugar,” sang the tune as the class jumped up and down. Yes, that was what she needed: something to sweeten the bitter pill of a lost romance. Yet, sugar? That was the problem, wasn’t it? For all of them here? Laura looked at all the fat bottoms wiggling from left to right.

“June is bustin’ out all over” was the song for this one. Well, they were all busting out all over, weren’t they?

Would she ever lose those pounds? She had no reason.

At home, she studied diet sheets. Fish, lean meat, low fat cheese, they told her, when all she had was some fatty bacon. What could she have with it? Fruit and salad said the lists. Well, she had a loaf of bread and she had to eat something. And was there anything so delicious as hot, buttered toast?

All that week, she ate her stodge. But she did start to exercise between the classes.

The scales still did not budge an ounce but, changing into her leotard the next week, she thought she detected a new firmness in her outline, in the mirror.

“Raindrops keep falling on my head…” The teacher’s music this week reminded her of tear-drop filled life. But she cycled her legs in the air and enjoyed the song.

The next exercise was to lie on your back with your legs raised straight, and then cross them back and fore like scissors. “I’m gonna wash that man right out of my hair…” accompanied the scissoring legs – all out of step with each other, Laura noticed with a laugh. She noticed she was laughing now these days, as well as crying. And she thought, yes, that is what she must do. She must wash that man right out of her hair. She made her legs scissor faster. And she had to cut that man right out of her mind. In fact she would go straight from this class and see if the hairdresser could fit her in on a slack Wednesday afternoon. She would have her long hair chopped and washed. Create a new hairdo, a new her. Geoff had liked her hair to be long. She would chop and wash that part of her life and send it on its way.

The following week, with short hair making her feel lighter, she felt more of a spring in her step, and in her movements. Why should she care that much about any man?

“If you don’t have a dream, how you gonna make a dream come true?” asked the song, and that  nearly made Laura  tumble as the circle of  women stepped round  the room.

How indeed? Lean  meat was expensive. Salad and fruit, not filling. How was she going to make her dream come true?

But, changing at the end of that session, she got the answer. She heard her fellow exercisers talking, and it seemed the magic word was vegetables. Potatoes would be warm and comforting on winter days, but filling too. And cheap. Beans, cauliflower, carrots could be sprinkled with garlic or herbs or black pepper. You could make a vegetable curry, or a soup. And root vegetables apparently the most filling food of all.

Straight from the class, Laura hurried to the little greengrocer’s which never closed on Wednesdays, and bought a bag of these magic ingredients from the smiling young man.

Then she skipped home to cook a lovely vegetable stew, feeling strangely and suddenly happy.

Though she did not know the reason. Now the weeks flew by and the pounds dropped off, and some clothes had to be taken in. The keep-fit class became the high spot of Laura’s week as she abandoned herself to the body movements, the tunes and words.

Perhaps it would be more true to say that Wednesdays were becoming the high spot of her week, with the class, then the vegetable shop, then an evening of cooking experiments.

In the class, all the songs they exercised to seemed to be speaking directly to her, and the teacher’s words were like a magic spell. They transfixed Laura, inspired her, as “Walk tall, think slim,” she told them. Then all their bodies swayed and twisted like windmills, to the joyous accompaniment of “heart and soul I fell in love with you, lost control and tumbled overboard.”

Was music indeed the food of love? Well, chips and buns were certainly the food of unhappy love, Laura thought as she walked to the greengrocer again. Or the food of no love.

The greengrocer was always whistling. Whistling a tune. Music the food of love? Then put another nickel in, laughed Laura to herself.

This time, the young man stopped whistling long enough to ask her if she were keeping a rabbit, and she told him she was eating vegetables for her figure.

“It looks all right to me,” he said, and gave her a wink.

But that evening, as she chopped her vegetables, Laura felt strangely unsettled… she was lonely, that is what it was, she decided, and switched her mother’s music on for company. All the old songs which she had come to love.

Music the food of love? She asked herself. Then, “Say, Mr Tambourine Man, play a song for me. I’m not sleepy and there ain’t no place I’m goin’…”

It was no good, she decided the next day, she had to cheer herself up. This weekend she would buy herself some new clothes.

And she did feel better in her size smaller skirt, and tighter jeans.

Now, spring was in the air. All the class were happy. They had all done so well. “In your Easter Bonnet,” sang the music, and they jumped up and down for joy.

Laura was enjoying the class more than ever before. The last exercise was accompanied by “trees everywhere, with blossom in their hair.” Hair, she thought, as she almost danced.

home. Yes, she would make an appointment this evening. She would be even more daring, and have the latest style. And maybe a few highlights too. Just for the fun of it, she giggled, as she ran to the greengrocer. Not for any other reason at all.

Everybody admired her hair. It was the last class of term and she had reached her goal. A whole stone lighter.

Perhaps she should book another term, in case she put it back again. Or she could exercise alone. That was all she needed. Exercise.

One last trot round. One final, “Knees up, girls,” and slimmer bottoms now bounced from left to right.

“Another season…” Yesterday he had whistled a softer tune.

“Another reason…” And he had asked her out.

The bottoms wiggled in time.

“Another reason,” sang the song to Laura …