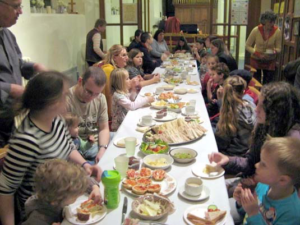 I am at the church which I sometimes attend, mostly for their social events such as a Harvest Suppermeal or one of their discussion groups and courses.

These meals, For the Homeless, are run by a local charity, and churches in the area take their turn to be host, about twice a year. It works out that there is a ‘Homeless’  lunch every month.

Not all the visitors are homeless, somebody tells me. Maybe just lonely, outsiders, people who do not fit in. Or perhaps some are just in need of a good meal. Poor, out of work, those with mental illness – or on the borders of it? I do not know.

A mixed bunch in terms of sex and age. Some behave oddly, even aggressively. None looks that good; all shabbily or oddly dressed. One looks very ill. Stick-like.

The church has small tables which are put together to form longer ones, for communal meals or meetings. Now they are set out singly, so that they only seat four. They have checked tablecloths and little posies of flowers.

People drift in from too early until almost too late. They pay sixty pence and get a plate of ham salad. There is a great variety of salads and also potato, grated cheese, and a boiled egg. At the tables they have glasses of water and a side plate for bread and butter.

Some ask for second helpings, or to take something home. One wants to take a slice of ham home for his dog. Then a dish of water for his dog, who must be waiting patiently outside. We give the water for the dog but not the ham and, when somebody asks for third helpings, we refuse.

There are lots of puddings and everyone has second helpings. I notice the strawberries go first. Two girls arrive very late and refuse to pay. Some of the others go now, calling the newcomers, ‘gypsies’.

There is some aggression from one of these girls: about the cost, about wanting more, wanting another slice of ham. And wanting to stay on when we are closing. She says we helpers are all the `rolling-in-money rich`.

I am reminded of one of the Revenge plays, where the drama takes place in a city. And we know there is the mad house outside the city wall.

There is more evil – which is the extreme of madness?– outside the mad house than within. The evil is in the King’s court itself: in fact, in the heart of his own family.

Then I remember, too, those politicians or philosophers who have said that there is as much bad outside the prison as inside it.

Who is bad? Who is mad? Which of us is the poor or the sick, or the dysfunctional? Who are the maladjusted or the loners? Who is the different one, the one who does not fit in?

Have not many of us at some time felt alone and outside the City Wall? Outside convention – even cut off from human help?

Amongst the servers and helpers there are one or two living on Benefit, or nothing but a State Pension. There is one who has been seriously depressed, and another who has had a breakdown.

Why do we help? I know that I am doing it just to get out, have somewhere to go, have company, and get a meal.

Money for the food comes from the umbrella charity, and of course cash is paid by the people who attend. We have to cater for the maximum number likely to come, and some of the helpers bring food they have made or bought, to be sure there is enough. And so there is always a lot of leftovers. When the visitors have gone, the doors closed, and all is cleared away, some of the small tables are put together for the helpers to have a meal.

We are loath to give too many second helpings or food parcels to be taken away. Some late hopefuls may appear at the door before we have closed it.

Yet, at the end, we eat more than we need, some of us even take something home. A few scraps I sadly watch being binned.

Surely we should give second and third helpings when asked? Give plastic boxes of leftovers to take away? Something for that poor, good, dog? Then, when someone turns up and nothing is left, dash out to a shop to get them something?

And if we got nothing ourselves? Well, it is good, after all that work and then clearing and cleaning up, to sit together at a communal meal. Of course it is. But we could go out and easily – reasonably – buy enough. And at least we would be throwing nothing away.

Who did the best out of this day? Those who received not-unlimited fare for sixty pence? Or we who eat our fill for nothing? And do not experience any shame or ignominy about being seen as the pitied needy. But we can pat ourselves on the back and feel good about how we have spent our day.

There is one last slice of ham. That girl had wanted one. The dog deserved it too.

I take it home.