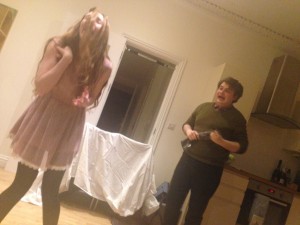 I am currently in the midsts of getting the last props, sounds and costumes ready for a play that I am doing at the end of the week. It’s a 3-night run of a play called Jennifer’s Robot Arm by Paul Vickers. It’s a bit silly and fun, and although it can be knackering, stressful and time-consuming putting a play on, it is also very rewarding in the end. Especially working with John, Connor, Miranda and Martin.

A little bit of me goes rosy-cheeked at the idea that I am simultaneously putting on a play whilst I also have a book out. Such indulgence is purely delusional, because having a book out whilst doing something else is nonsense, the fact the book is out doesn’t mean I’m doing any work on it.

But hush you, I am, because I know, due to my (thankful) anonymity and complete obscurity, the only way the book is going to get into peoples hands, minds and bellies, is by reading it to them, talking to them about it, and eventually they may deign to get their own copy for keeps. The whole process of connecting with people about the book is joyous, the feedback, the ideas that come out of it when it’s in other peoples minds, its a hidden joy revealed! So, yes I am also preparing to do some readings in various Universities over the coming months. I shall be going to SOAS first on the 22nd April, then to Bangor in Wales on the 27th, then rounding that off in Durham on the 1st June. I am sure they’ll be more and more added, but next week is the first proper reading. I must prepare something good for it I don’t want to let the SOAS lot down. I shall mull something magical over.

But for now I return to splashing chocolate water over my blouse and repeat the words ‘You’re going to be a star Jennifer, this is it you’ve arrived, anywhere I can plant our TeePee, the freaks will perform. I would dearly love to rehearse the black forest steam-train routine, with me!’ – Yes it goes on like that!