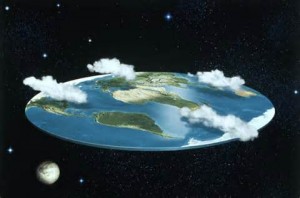 There are degrees of uncomfortable conversation where your host might sometime raise the subject of the flat earthers society. Dinner parties where one previously unassuming character pipes up about the divinity, or veganism or even worse, homeopathy. Or there is the awkward racist who tries to pretend they aren’t racist. The unapologetic bigot is, in fact, easier to deal with than the slippery prejudiced sort, as at least you know where you stand, and more often than not they are tolerated with a guffaw and a dismissive middle-class nod. That old adage ‘never talk about religion, politics or football’ is well-worn, and with good reason. No-one wants regurgitated tit-bits from the Daily Mail whilst they’re chomping through a substandard creme brûlé.

Then there are the conspiracy theorists, who for me are in a league of their own. They seem harmless enough on the surface, a curiosity that people seem to tolerate and even enjoy as a whimsical distraction from their mundane lives of pap smears and reverse-parking.

They present themselves as Logical Positivists – ‘you can’t prove anything, unless it’s in front of your eyes’ – but then they go from that fairly philosophically rounded statement to ‘that’s why lizards killed J.F.K’. (One may scoff at this, but such stuff has been told to me with a straight-face and a fixed-stare by otherwise rational people). In a society that allows shitbags like Katie Hopkins their free-speech, as ill-informed and full of lies as it is, you have to take the rough with the smooth, and such ‘theorists’ feel they’re allowed to talk nonsense and be taken seriously.

I don’t begrudge people their own free thought, but it begins to worry me, when people choose to engineer their own truth at the expense of collective progress. This is why something like ‘Flat Earthers’ are more dangerous than their laughable ideology. To stand in the face of overwhelming evidence and say ‘the Earth is flat’ with a complete lack of irony, is a symbol of some imbecile superiority. It doesn’t matter that they’re plain wrong. These people make their own truth, but it’s a kind of belief system (like organised religion) that trashes common sense and a progressive world.

It’s all too easy to create a conspiracy. I invented one myself – ‘Margaret Thatcher Never Really Existed’ – and let me tell you, what I put down is not that much of a satire of what these buffoons on youtube waffle on about for six hours (‘it must be true, he goes on about it for six hours’)

It begins with Flat Earth and ends with ‘The Holocaust Didn’t Happen’, which is one idea designed to create another. It’s the arrogant will of insecure, damaged people lacking in a sense of purpose. People who want to be the founder of a new belief system. They are frustrated philosophers, with no imagination or ideas, so they latch onto the most outlandish of sentiments in the hope that ‘it’s so crazy, it must be true, and I am the one to be its messenger’.

The real conspiracy is one of silence in the face of governments selling our future  by taking over food production and giving us processed crap, starting wars for money, letting the disabled die rather than picking up the bill. It’s all there in our faces. Perhaps to believe the world is really flat is soothing in the face of this real horror.

I think what angers me most about conspiracy fantasists (because a theory needs a basis and they have none) is that there is no way to reason with them. The basis of their ideology is one of ‘I know more than you, you are but sheep of the herd’, so how are you to make headway with them?

Unfortunately they are also but sheep, of another herd, but don’t tell them that. They may assume their true lizard form and eat you.