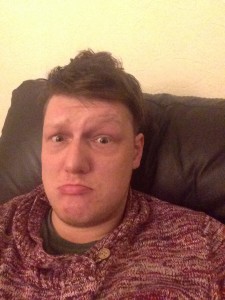 As I prepare for todays talk at SOAS LGBT Society in London. Something that I am half excited, half nervous about, I was going to share such nonsensical fears, but then I thought that would be rather silly. Instead I thought I’d give a run-down of five other bloggers who wanted to talk about Bastardography. In no particular order here they are:

Mr Fleming I first met at ‘The Grouchy Club’ at the Edinburgh Fringe in 2014, when he was a mere slip of a thing with removable teeth. He was sweet and asked if he could interview me, this was a day after the e-book publication, so I was very green and excitable. He was a great interviewer, especially when he asked questions and then went ‘Oh that was a load of crap that question, ignore it!”.

Sarah-Jane was a Uni friend of mine who has gone on to make a brilliant Vblog channel on youtube, as well as a writer and Jewellery maker. She also wrote a great blog about living with Fibromyalgia which was very inspiring to be open about one’s personal stuff. She asked some great questions about the book 🙂

This was a bit of a left-field one. I came across LGBT activists on Youtube, and thought I’d tweet some and see if there was any interest. Ian (who is from America *gasp*) wanted to read my book, and said some very nice things on his youtube channel about it all, about 3 mins in (on the vid link) although do listen to his Thoughts on RFRA-Indiana and Online LGBT bullying too!

When I asked Stonewall if they would be interested in getting involved with the promotion of Bastardography, I spoke to a guy I used to Volunteer with at Stonewall Towers, and sweetly they said they would help in any way they could. The asked me to blog about my experience with Stonewall too and why it was important to me, which is rather nifty, isn’t it?

It’s all well and good me copying and pasting amazon reviews ad infinitum, but there are some sweet little sausages that bother to put their opinion out in the internet ether themselves, here is one such example, what darlings.

Here is to the next five blogs, I am happy to talk to anyone provided they’ve washed, although if it’s via internet/telephonic communication that need not apply.