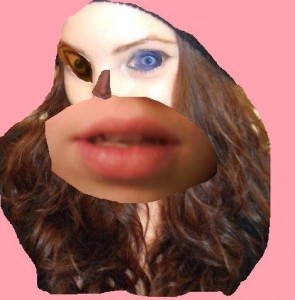 In the writing of a book, lots can change. My original idea for the book was that it would be a collage, a patchwork memoir, that didn’t follow a narrative line; luckily my publisher talked me out of it, because I think people would not have responded well to it. Although perhaps the idea could be used in another way. Here below is the book’s original introduction, let me know if you’d ever want to read a ‘patchwork’ book?

WALL COLLAGE:
Explaining why this book is the way it is!

Sometime during my late adolescence, due to my O.C.D and the bizarre tendencies of my parents, I decided to move out and get my own flat. Not an easy feat for a teenager with no income, no friends and no prospects. But due to some ‘creative homelessness’ aided and abetted by my Aunt, the council provided me with a charmless flat in the arse end of nowhere. This was a pokey affair with no décor. We did try to decorate, but my absurdity made it impossible and during my tenure there, only one strip of wallpaper was hung in the living room. The paint-flecked broken plastic floor-tiles crunched beneath my feet, the windowsills accumulated fat dead bees and I left a pot of pasta on the hob for six months until it transmogrified into fluorescent blue mold.
Perturbed by my hollow environs, I set about trying to make it more ‘homey’. Rather than dusting or cleaning, I got out the wallpaper paste, the scissors and started to stick every cherished piece of paper, identifying document, photograph and newspaper clipping I owned to my bedroom wall. I stuck up hardcore gay porn, my birth certificate, selections from The Telegraph’s Literary Supplement, hospital records and even a death mask of Les Dawson. I covered every inch of wall space with the things I loved, loathed and thought made ‘me’, me. So unsure of my own identity at the time, I thought if I had what symbolized my own life, interests and experience around me; I’d somehow manage to hold onto it and make it permanent, eternal; it was my terracotta army, but with nicer cocks.
It was such an odd thing to have your life staring down at you as you tried to sleep at night, luckily I’ve been a lifelong insomniac.
I never really considered the implications of making one’s persona interior décor until a few years later when it came time to give up the hovel.
“Your Father had to get in there and scrape it all off the walls before the next tenants took up the place, imagine them coming in and seeing that everywhere?” My Mum told me when I enquired about the fate of my tableaux. I blushed slightly at the thought of my Dad peeling away at this monstrous very personal collage.
Looking back on it, I realize that the process of making this personalised wall collage, is more me, than the things in the collage. My mind leaps and pirouettes about from one non sequitur to another as much as in conversation; it’s tangent, tangent and tangent. My life so far has been one long tangent.
So, it seems just and right that I represent all the fragmented aspects of my life so far as a written collage. The following pages contain diary entries, letters, e-mails, messages, haikus, transcripts, play extracts, poems, anecdotes, medical notes, police statements and recollections; not in any particular order. Like all good collages, one finds a pattern, a method in the madness. Incidentally my madness also features. Please dip in, I’ve sub-headed each layer of the collage so you don’t get totally lost, but don’t think you have to start on page 1, it can be read in any order you like; make it your own collage.