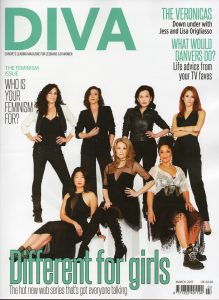 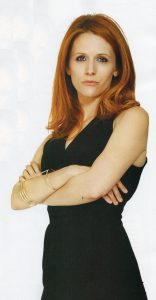 Jacquie Lawrence hosted a Press Evening in West London last night to promote her new show Different for Girls, a web drama adaptation of the Zitebooks Polari Prize shortlisted novel of the same name. The well-attended night show-reeled highlights of the recently filmed series about Lesbian yummy mummies with five episodes already in the can, and Jacquie and Victoria Broom, who plays Fran in the series, both turned up on DIVA Radio 104.4 FM on Tuesday to promote the event. A chirpish Lawrence spoke about the project and her hopes for success, having also been nominated by DIVA for their 2017 writing award category (to be presented at London’s Café de Paris in Coventry Street on Thursday 23rd March 2017):

“When you’re nominated for an award in television you’re basically being rewarded for doing your day job, and it’s very collective and a team-based honour as well, but for writing this is fantastic. This is the first time that I’ve ever been nominated for such an award. It’s the first book I’ve ever written, and the category that I’m in, these women are fantastic. They are my role models. These guys have written millions of books, and I’m not exaggerating! Kiki Archer, Stella Duffy, Val McDermott, Lucy Sutcliffe and Sarah Waters… These are grown up writers! These women, I’ve been reading their books for the last fifteen years and I aspire to them, they’re my role models. I’m just so pleased to be nominated alongside them. I’m absolutely thrilled. We’re at BFI Flare on St Patrick’s Day, Friday 17th March, and then we ‘drop’ the series. Today we finished the title sequence with its fantastic track.

“As a web series, Different for Girls will not have episodes that are quite as long. You might have to watch the whole season for one breast feed. The first season really is half a season, because of Brexit, and so that’s five episodes of around thirteen minutes each. The first season will be sixty minutes.

“I’m really pleased with how it’s turned out because writing a book’s quite personal and very solitary. It’s a bit of a cheat though because it started off as a development for television in the first place. This was in the wake of Queer as Folk, and then the men in suits said the great British public can only cope with one Lesbian series at a time. Of course we can all consume hundreds of hospital or police procedure dramas… So it was canned, and then The L Word came along. I left television round about that time, and put the Lesbians in the developmental top drawer of my desk.

“Flash forward ten years and I’d left television, I’d had these two kids, and they were at school and I thought, if my life has changed so much because of changes in fertility law, in married law, in family law, then I’ll bet those Lesbians in the top drawer, their lives will have changed too. I took them out and dusted them down, and aged them about fifteen years, gave them wives and gave them kids and took them from Camberwell, where the series was originally set, and relocated them to Chiswick, and if you take a Lesbian out of Camberwell and put her in Chiswick, you’re going to get a whole new set of narratives. So it’s not all about coming out and clubbing. The novel then had a new life and created some fantastic characters of which Victoria [Broom] plays one. She’s a naughty girl!

“Now we’re on the cover of DIVA, which is exciting. It’s a bit DIVA meets Vanity Fare, and we’re just hoping it’s going to go out and millions of people will watch it and there’ll be a big roar and we’ll get millions of dollars and make five seasons!

“I’ve got a contract with my publisher which I’m about to be sued over because I haven’t delivered the second book (only joking), but I have got enough material for another book, which would be seasons three and season four. The first book is only half the story. I’ve got this great storyline about this catholic priest whose wife runs off with Heather Peace! You write about what you know…”

Jacquie Lawrence’s book Different for Girls is available as an eBook and in paperback, both from Amazon.