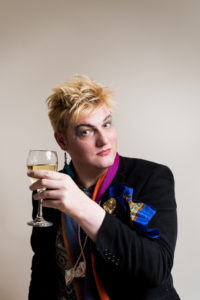 It’s just over two weeks before I take the Balham stage to bring my book Bastardography to life. The play’s subtitle is ‘A queer, creative, mental health odyssey’. With a background in theatre (no sniggering at the back, there!) it seems a natural fit to create a unique theatrical experience based on the book rather than simply doing ‘a reading’, which to be honest, unless your Charles Dickens, falls rather short of being anything other than boorish.

What’s it all about Simey?

So what will transpire at the top of N16 in a few weeks? Well, there are so many shows and resources that have inspired me to the format of the evening. Obviously the themes and stories of going up gay, mental and creative will permeate the show, but I wanted to share something more. Something about how personas are constructed, how to deal with trolls online, negative reviews and whether revealing yourself in a memoir changes how people interact with you?

I love the work of David Hoyle, Hoyle’s performances are by turns revealing, creative, funny, educative and original, and I hope to have an element of that in my performance. Similarly, I was raised by dead camp comedians, who I watched in awe on television as a bubba. So the anecdotal style of Kenneth Williams will somehow inveigle its way in there; especially his tour de force which his ‘audience with’ show; it’s a masterclass from an experienced raconteur. But even if I wasn’t aware of the influence, it would bleed into the show anyway wouldn’t it?

Proud to be part of Pride

It’s a happy accident that we are doing the five night run of the Bastardography show during #Pride2017 month. I want the show to be a celebration of LGBT culture. I am currently reading ‘Good as You’ which charts the last 30 years of Queer Culture, and how it’s developed. I’m 30 at the end of this year! How far we’ve come, how far we have to go, is explored in this show. My life is a barometer to highlight wider cultural change and shifts in the public consciousness. Despite my insecurities I really don’t want this show to be simply about me, me, me.

But it is going to be about those aspects of me; living with mental ill health, being a big chunk of the show, almost like some cosmic queer guru offering solidarity. Especially with the state of the country, the way people with mental ill health are being treated (or not treated), I think I’m ready to describe elements of bad treatment I wasn’t ready to in the book.

Creativity will be what holds the show together, I’m having a lot of fun creating a soundscape for the show, costumes and set-pieces, oh it’s going to be beautiful. I hope you’ll be able to come along to see the show in Balham on the 20th June (and playing till the end of that week), it’s on at 9pm! Which seems oddly late for a show? Not in any fringe venue up and down the land, and I’m hoping to create a cocktail party atmosphere for the performance, which makes it feel less strange for you. Anyhow, do let me know what you want to see in the show if I’m missing something out?