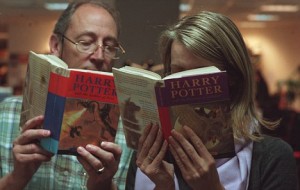 I saw a notice in my library telling us that one of the librarians was reading to a group of adults. Just as they do to children. He would be reading from The Hitchhikers` Guide To The Galaxy.

I had never been interested in that series but joined the group thinking that having it read to me may draw me in. It didn’t, but I stuck it out. Sometimes it was only me and the librarian, and I wanted it to work for his sake. He likes reading aloud!

Gradually we became a good sized group. The reading slot was from 5 to 6pm, and the chunk of book the librarian wanted to read filled that, with just a few minutes for discussion.

I did not like the book, and when it was finished we got the next in the series: Restaurant At The End Of The Universe .

There was always a notice in the library (the one which had attracted me) announcing the group and the book being read. So when we got to Life The Universe And Everything Else, a new woman came because she had never heard of the series and thought it was a discussion group about the meaning of life!

And that is what it has become. The discussion became longer. We moved to short stories, so we could do more talking. We discussed the story and how it was written, and sometimes compared it with other works. We discussed the life issues brought up by the story, and gradually how those issues related to our own lives.

In fact the librarian himself was the first to do that.

Gradually’ the sessions became longer, until we were still there at 7 and they were almost throwing us out. Well, politely telling us that the library would be closing soon.

We members of the group have become close. We speak of what matters to us, our current problems, our childhood stuff.

(As well as the fun of life of course,  funny instances in our lives. In fact she telling of the awful often becomes funny. Maybe the permission to tell is all we need. Then it suddenly seems to matter less, and we see only joy)

We are heard, and nothing is barred or stifled. I have spent many years and decades with people who said little more than pass the marmalade. Or talked of their holidays and what they were doing to the house, whether new kitchen or yet another extension.

Problems were barred. ‘Don’t  go on about it,’ when you have not said it once yet. ‘Put it behind you,’ when you are living with the results of ‘it’ every day.

In his book, Lear, Edward Bond said all the suffering – or was it evil? – in the  world is caused by unhealed pain.

Why don’t people want to heal their pain, or let others heal theirs, by talking about it?

I am not claiming to be the only thinker or listener, or that all conversation and entertainment are about ‘surface stuff’. But I meet very little of what I would call real talk. And I have had many people tell me something that they have never old anyone before (apparently I have  a kind face!)

It would be great to see more groups of reading to adults. Where stories are read which promote the discussion of life issues, and from there the opportunity to uncover your own hidden stuff, which could very well have been hidden even from yourself.

I believe that in telling you come to healing. And that in the kind of relationship or group relationships where no subject is taboo, you are freed. Free to be a full person. Or rather the complete you. Which of course has a wretched side, but a very joyous and fun-loving one too.

You can’t have light without dark, or good without bad. We need to own -and express – our sad, angry demon of black. In order to meet our inner jester, with his wand of shining gold.

There is a belief that we have archetypes within, and we need to go though the stages of each in order to become our full selves. The archetypes for example are the innocent, the warrior, the ruler. I was reminded of that after that image came to me. The image of how I see the other side of the face of our angry demon: an inner jester with his wand of shining gold. For almost the last two archetypes are the magician and sage.

And the highest attainment is the fool. The fool is not a silly person. He is the great advisor – and entertains. *

I hope that some of my writing on Zitebooks will touch my readers in a healing  way.

And that more groups, like ours, will help the world even more, because they will be little microcosms of community.