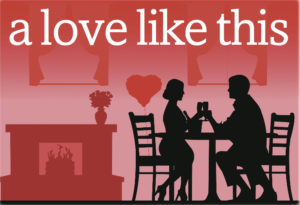 I don’t expect it to be there.

It couldn’t be, could it?

Not after all those years?

But at least if the restaurant were still there… Well, it would do something, though I can’t think what.

I can only think of that little tingle, inside my heart, when I remember the ingle nook. Oh, tingle and ingle. I love words. Actually I am not sure what they called it. I think it was ingle nook, but that could be my fanciful way with words. Was it love seat or cosy corner?

I remember a woman I met once who called the little breakfast bar in her kitchen a rookery nook, and it has all become a bit confused with that.

But – impossible though it may sound – I really do think it was ingle nook. Though to me, it has become my love seat.

It all happened years ago when I was here with a Mr Wrong. And now I am here again, with another man. Mr Right or Mr Wrong? Only time will tell.

I have never forgotten it because – well – I suppose it was a vision of how I wanted it to be, always thought it would be. Could be. And is still in my dream.

We were in a restaurant in this same seaside town – what, five years ago? I knew by the end of the holiday that really my “love affair” was not that, in any way. Certainly not in my way, which you may think a romantic, fairytale way.

The couple had sat beside us. It was an expensive, exclusive kind of place, and small. But being popular it was crowded, so we two couples sat fairly close, both on little tables for two. They were a bit older than us. Young, middle-aged, I suppose. They were posh, or intellectual. Was that what I wanted? No, not so much the posh. But – well – interesting. Far more interesting than my Mr Wrong.

She was pretty and sexy really, in a quiet, tasteful way if you know what I mean. I can still see so clearly the short hairstyle, easily pretty as she had what I am sure was naturally curly hair. The silk dress with a soft print of flowers was expensive, no doubt, but not loudly so.

It was not too tight. Not overtly sexy. But I have often thought that there is more of the sensual where soft material suggests rather than reveals the feminine curves it hides. They were talking quietly and intently and there seemed to be some family problem which they were discussing. Nothing life-shattering; but

something which needed to be puzzled out, and where better than in a quiet restaurant, with their food quietly served to them?

It seemed to do with the logistics of bringing a younger relative to the area and getting someone to meet them. Not a life-and-death or family break-up thing but a worry and a poser. There was an air of concern, but also one of mutual care and gentleness, especially from him to her. Perhaps it was her relative, not his…

I tried to join in. Well, make a connection. I think it was at that point that I realised my current Mister was not deeply interesting, nor gently concerned about anything which concerned me. Yes, maybe that is why the memory of this scene has stayed with me, and is imprinted so deeply in my mind. That this slight encounter was my moment of epiphany, making me realize just what I wanted from a lover.

So I asked the woman about some local attraction – about a famous poet I had heard once lived in this place, since poetry has always been one of my things.

The woman was polite but clearly did not want to be taken away from their cosiness. She gave me details of where to go in the town, where she was sure they could help with my enquiries.

I had so wanted to get into conversation with them. Not unheard-of between two couples in a restaurant, is it? As I say, this was a moment of dawning. I had spent too much time with boors. And bores.

We finished our meal before the other couple and were asked by the waiter whether we would have coffee here, or in the ingle nook.

I did not want to leave the couple. I wanted to catch the odd word of their intelligent exchange, and even still, somehow, become included. Perhaps over coffee they would relax and leave their worries.

But immediately after us they too were asked where they would like to take coffee, and chose the ingle nook.

“You missed your chance,” remarked my man, with a flash of uncharacteristic astuteness as to what was going on for me, as I watched this other couple. I had been giving more attention to them than to him, but we never had much conversation anyway. In fact it was he who early on in the meal had used the word “intellectual”.

“I think they are a bit intellectual.” He could recognise such talk, though he had been known to call some such conversations “talking about talking”.

As he asked for our bill, I walked out to the ladies. I passed the ingle nook, which was a small space sectioned off by a low partition. The couple sat side by side on a padded bench against the wall, their coffees on a low table before them. There was a weariness – or rather just a gentle tiredness – between them. A cosiness, really, as he stroked her leg through the silk dress.

I have never forgotten that scene.

And now here we are, back in the same town. A favourite part of the world all my life, beginning with childhood holidays. a restaurant there – and it looks very much the same. But it can’t possibly be the same inside. Everywhere has constant refits, don’t they? – whether to keep up with the times or to look as though they are prospering. Even if they wanted to keep the original image, market forces would surely want them to make better use of the space than have an ingle nook for coffee, where they could put in more tables for dining?

I can’t rush. Mr Man of Today is looking round at this and that. I don’t want to seem to be pulling him towards that restaurant. He likes to relax and choose what to do. We weren’t thinking of eating yet anyway. But somehow our ambling has brought us right alongside the restaurant. It looks just the same.

“Do you want lunch now?”

As the Man opens the door to the restaurant, I hold my breath and look towards the spot. And it is still there. My Ingle Nook. My Love Seat. It must have been refurbished, surely? If the material of the plush seats has ever worn thin, it has surely been upholstered. I can tell no difference.

The seat is there – it seems impossible. I have been thinking of it for all those years. Despite my hopes when I knew I was coming to this seaside town, this old haunt of my dreams, I really did not expect to find the restaurant, let alone the ingle nook. It means to me that miracles can happen. If the place for such love can last, so can that kind of love. The idea of that kind of love. I know it means that anything is possible. Even that kind of love for me.