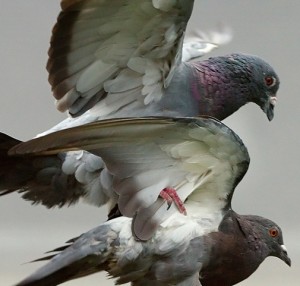 Years ago I took my mother into the cafe at a garden centre.
In those days (I have not been there for many years now) the cafe was run adjacent to the plant  sale area, and therefore open up to the outside elements and whatever might happen to be passing by. Therefore you could hardly be surprised that pigeons came into the cafe.
These birds would fly about lazily, and would often perambulate around the area with people throwing them tit bits. They would sometimes even brazenly strut their stuff on the tables until some of the more charitable fed them crumbs taken from the remnants of their afternoon refreshments.
Apart from the lack of hygiene (these creatures are vermin, after all), I have a deep-seated phobia about birds. I am all right about them on the outside – but if they come into wherever I might be residing, I will feel myself shrinking at the thought of one settling on me, or flying at me like an epileptic battle plane.
So my tea time with mother was often ruined by these birds in the garden centre.
And finally, being a woman of letters, I wrote to complain – taking care to stress the hygienic aspect coupled with my horror at seeing birds on the table clothes amidst the cakes and tea cups.
The centre wrote back promptly about their inability to prevent such birds coming in because of the place  being a garden centre with an open air plant section .
They commenced the letter with ‘ We are sorry you were disappointed about the birds in Squires Garden Centre…’
‘Disappointed? ‘ said my mother, ‘You were positively ga ga!‘
‘Disappointed!‘ said one friend. ‘Sounds like you were not enjoying the bird you were eating from their cafeteria.‘
‘Disappointed!‘ said another. ‘Sounds like you wanted parrots and other exotic birds, rather than the dull sparrows.’
I have since realised that my fear of birds indoors comes from us always having a cat in my childhood home, which was always bringing in dead birds. I was once sitting at the piano when I felt something against my leg. It was the feathers of a bird in our cat’s mouth! I found the whole episode horrific, revolting, even sick- making…
In Neverland, Brenda is revolted at the feathers which seem to cover the apron of her friend’s mother – and all they frighteningly suggest the activities she may be perpetrating with her chickens at the back of their house…