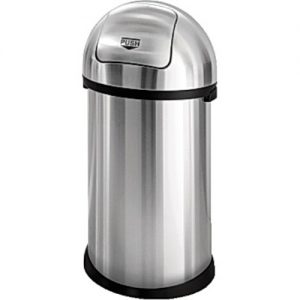 From time to time my son comes round to do what he calls ‘jobs’ for me, jobs that answer to the description of minor maintenance and repairs.

He came two weeks ago, so I knew who the culprit was., when I found a few bent screws, an empty glue tube and a dead battery in my study bin.

See, I don’t use bins. Never have done. Don’t put things in them, I mean. Except in the big kitchen one. Which would have to be big, wouldn’t it?

I remember once inviting a group of fellow students round to my house back in my university days. Among them was another mature student, like me, who had come with his girlfriend and baby. When they had all gone home, I discovered they had changed the baby, not only putting an unwrapped wet disposable nappy in my kitchen bin (smaller in those days) but had left it half hanging out.

It has only recently fully registered with me that I don’t have bins. And I wondered about people staying overnight with me. What do they do with those nasty messy things – don’t let’s go there – which one may use and finish with in a bathroom and may need to dispose of? Do they wrap them in my loo paper and sneak out to my kitchen bin hoping nobody sees or examines them? Poor things. What misery and embarrassment have I been causing?

Maybe it hit me because a visitor who had been showing me a leaflet or some such paper information had finished with it and, looking round, had asked if I had a bin. And I would have replied… only in the kitchen.

As an aside I had a visitor who arrived eating or drinking something and, the moment I let them in, went straight to my kitchen bin and put the wrapping or bottle in it.

Not by your leave? It reminds me of someone else who used to open my car window without asking. I must add that I am not a grumpy. The other day I read the perfect description – most apt summing up – of the badly behaved guest. ‘ …he is the kind of person who puts logs on your fire.’

Opens your windows, puts logs on your fire, answers your phone, puts things in your bin.

So why do I have a bin in the study when there is none anywhere else: not the bedroom, the living room, the hallway, or the poor bathroom. Don’t know why. The study does often double as a dining room and second bedroom. Maybe I made that concession to some overnight guest deprived of that bathroom luxury… But I never use it. Hence the shock at what I discovered post the son’s departure.

Most likely I brought it to this flat from my previous house, where there were more bins, albeit rarely in usage.

I had a lodger – well, a brother between houses – who stayed with me in that house for a month. Soon after his arrival I found an empty coke can and crisp packet in the bin right by my front door. Once I had explained that I didn’t use that bin, from that moment on he happily took all the rubbish straight  to the kitchen. Well, he had had a lodger who put wet washing on his radiators, so was clearly reading from the same House Rules Manual as I was. The one you might assiduously prepare for any Air B’n’B guests.

I explained I didn’t like messy bins and having to empty them, and that the front door one was part relic from the days when I had a hundred children, and messy bins were favourable to things just left anywhere all over the house.

The last vestige of those days I had not yet got rid of and since I am, contrary to how it may seem, a sociable person who is happy for people to come in to my home, I kept it for the less well known visitor who was allowed to put a bus ticket in it. Just the one.

‘Why did you have that bin?’ a friend probed, when I had been telling her this story, ‘if your brother could not put a crisp packet in it? And if you didn’t really want the bus ticket?`

In Neverland there is no mention of there being any bins in Brenda’s home, nor any disposable nappies to put anywhere, rightly or wrongly. Her mother, Gladys, tips the contents of her youngest child’s potty down the kitchen sink. And Brenda finds some nasty rubbery slimy thing down the cushions of the fireside chair where Gladys and her husband will have sat, canoodling in the evening.

Pamela Pickton’s book Neverland is also on sale on amazon now, and on all good ebook websites!