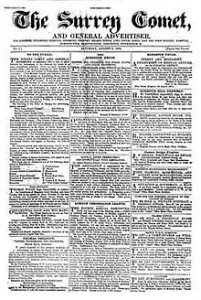 My son was born in our house, in Bushy Park Road.

His Christian names are Lindsay James. He was born early Saturday morning, and soon after he was delivered, followed shortly by our daily paper – the Surrey Comet.

On the back of the Comet that day, on the sports page, was an article entitled ‘BUMPER GATE FOR LINDSAY DEBUT’. It was about a footballer, I think, whose surname was Lindsay. We felt it was a sign on the day that the name was right.

But the day is long when a new baby has arrived in the house, and you still have two other young children to care for. Therefore it is no surprise that we forgot all about it – and consequently did not save the paper.

I remembered the incident recently, when his birthday was approaching, and set off to get a copy of the paper from that day. I went to the Kingston History Room, which was still then at the Richmond Road Centre. They told me it could not have been the Surrey Comet if we’d lived in Teddington. ‘It’s the wrong borough,’ the lady said, pronouncing it oddly as burrow.

I remembered that we also took a National Newspaper in those far off days so, undeterred, I went to the library to get help in searching through the records. No luck.

I rang that newspaper too. But since they do not keep all back issues on the premises, and did not have the birthday one, they told me I would have to go to Colindale.

Not particularly looking forward to the journey, I nevertheless got it planned out, packed my bag for an early start, and went to bed.

As I woke the next morning it came to me – I just knew it had been the Surrey Comet. In my head I could just see the format and the layout of the paper.

I called again, only to hear further cries of the wrong burrow – it was like a scene from a bad situation comedy.

She could not deny this. I called, as finally suggested, the history room in Richmond, and gave the man my son’s birth date. That was around morning coffee time.

By afternoon tea time he called me and said he had found the article. I went the next day to pick up the photocopy he’d done for me. So – do I now live in Surrey? Yes. Which includes Richmond.

Richmond is also now my county – although the wrong burrow!