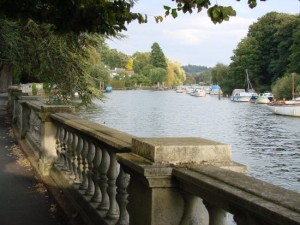 Sweet Thames run softly, for I sing not loud or long…

I am not a scenery girl, or landscapes or country.

More an ‘in the head girl’ – poems and stuff, as with the Spenser quotation above.

It was while at Twickenham County, the girls’ grammar school (the building in Clifden Road was there then), that I took myself out and down to the river. For I am a water girl. It must have been during a break whilst studying for my A’levels in English Literature, among the other arts subjects. It was there that I found how the river led to a gate which took me into the grounds of York House.

And I discovered the statues.

Not to mention surprised beyond belief, I was also stunned. Bowled over, in fact.

I lived in Teddington from the early fifties to the early nineties, and before I left I ran summer time creative writing classes in my house.

In term time, the classes were in Kingston Adult College Centres, so many pupils came from Kingston and beyond.

Now most people I know are country and scenery people. As their children became of age they travelled beyond Kingston to places of beauty and local history interest. Many of us, too, who had not been driving for very long, joined them. We did not drive far, but we didn’t have to to see all the wonderful things out there along the Thames. But there were those who went further afield than I did… And yet these would not cross the water. Would not come over Kingston Bridge to see me!

Is it ancient? Primitive? To do with boundaries, and the fear of going beyond the city wall?

To this day, I am astounded by some women much older than I am, who have been all over Surrey learning and looking at this and that. But none of them know about York House. Or the statues. At least they didn’t until I took them there.

Ever since I discovered York House I met new friends – gained new family in in-law children and grandchildren – and took them on pilgrimages to see the statues. Never telling them the secret of course. Keeping it as a surprise till we round the corner of hedges from the bridge.

I have brought people from Surbiton, Tolworth, Wimbledon and Putney.

So I see myself as at least an honorary Twickenham girl.