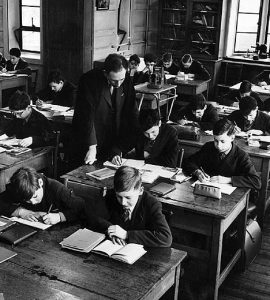 There is so much which needs to be said on the issue of grammar schools.
The subject is a minefield. It is presented as a healing blanket under the ‘opportunities for all’ banner, covering the world of education for a society which is itself already in no way equal.
Take the child who is so very bright that they get a special grant to a top private school, or one whose parents scrimp save and barely eat to put them there.
Can they keep up with the horse riding lessons, the name dropping, the conversations, anecdotes, holidays and social  life of their school peers?
‘Grammar schools give a fair chance for the bright child from a poor background.’
I went to a grammar school. I was very clever from the moment I went to school at five. I was one of nine out of a hundred to get a scholarship from a home where there was financial hardship, despite there having been no support or help for me, and certainly no coaching.
But being a child who was abused in many ways throughout the years under my parents’ roof, I have rarely lived much above benefit level, in any sense, and have certainly not had the intellectual fulfilment you would think might be present in the life of one who began their life with such promise, which I miss as much as money. But maybe that would be there if I had money – for all the arts,  travel and educational breaks – which are still beyond me.
It amazes me that we see awarding a grammar school place to a gifted child as an indulgence, a treat, a spoiling… an unfair advantage.
The child with severe learning difficulties, disabilities, or just a very low IQ, is still rightly considered to need assisted access to all the help they can get to live as full a life as they are capable of.
So why can’t the highly intelligent child have the same? Whatever it takes to help them reach their potential?
Without it they will feel stifled.
It is as though you are clever, so what more luck do you need?  The intellectually poor and the underprivileged need help. You, however, are okay. You are not okay if you are not given the help to develop and make best use of that intelligence you are lucky enough to have had from an early age.
My children were academically high flyers and always bored at school. We feel for the child or adult who is not the full shilling and who feels less amongst a group of clever people. And this is right. But why not spare a thought for the bright child who is let down.
At the school of one of my daughters, a prize was given each year for the child with the greatest sporting achievements.  She was not good at sport, and she suffered because there was no prize for the one of greatest academic achievements ( her, in this case). That  was junior school and she was a young child.
‘Poor child who is not blessed with brain we will help you, poor soul.’
‘You, you are clever. Think yourself lucky.’
I helped in a Sunday school and saw it again as very boring.  ‘Can’t we do this and that?’ I asked the church leader.
‘No, because how would the likes of Jenny Smith cope if it were all above her?’ So the majority had to have their work set at the level of the lowest denominator. That discrimination was as much or more than creating grammar school places.
People of high intelligence will not necessarily do well. Even if they do, they may still not be ‘okay’ or ‘all right’. Being intellectually or academically a high achiever does not mean you might not have the emotional intelligence of a flea. In fact the shower of gifted individuals are perhaps a bit abnormal . A bit like a genius who can’t tie their shoe laces?

People have many needs. I have needed support in many way and at many times which I did not receive. As a child I lacked my parents’ care, attention,and the attention of the teachers too. That caused me personality problems that prevented me reaching my intellectual potential – or my earning one. My daughter needed recognition of her brain prowess as much, as that other child in her school did of her sprinting prowess. And it somehow wounded her to not to be given that.

Children who passed the scholarship were often disliked out of jealousy. Walking home from school in my uniform I was often jeered at and bullied by girls who worked in a factory near my home, and who waited for me to pass by each day. (you didn’t  wear a school uniform in those days to junior school and secondary school, only to the private or grammar schools.
Most of all the mistake is to think if you are clever that you are made, so you’ll need nothing else. We have many needs, and can have other problems. We will always recognise these in those who are not bright or who have recognisable mental issues.
I encountered difficulties coming from a home  and family which at best could be seen as unsupportive, and at worst, abusive.  The result was an extreme lack of esteem or self image and an inability to protect myself from bad behaviour.
That is probably why some people don’t reach their potential and why they spend their lives rarely living above benefit level. Their relationships may suffer too.
‘Give the privileged the chance of a better education.’ This is not enough.
Give all children, rich or poor, intellectually challenged or highly gifted, the education and bringing up that they need. Their progress and development in every way needs to be observed and monitored. One child may be given a taxi to take them to school each day if they have extreme behavioural problems.
The very bright child we want to give these grammar school places to may have the same or worse inner problems as the child in the taxi but because they are bright they will be told that they are silly or a nuisance or should simply pull themselves together.
Maybe to be clever you are lucky. To get that grammar school place luckier still. So why does it not work out for some people? Maybe we don’t understand that the gifted also have things which may go wrong with their development just like the ones who are not very bright, or whose parents are on drugs, or who beat them, or a child perhaps who just can’t help behaving badly.
Of course the child who is very clever can always have inner, invisible bruising, which may never heal.
Pamela Pickton’s book Neverland is on sale on Amazon now, and on all good ebook websites, and you can find more about Pamela Pickton’s travails and worldly challenges in her Zitebooks’ collection of short stories, Reasons, ready to buy on Amazon now.