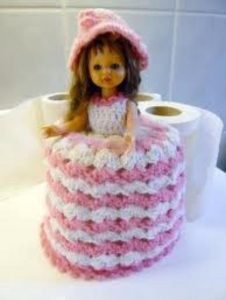 My friend was alarmed when, upon arriving at her hotel, she went straight to the bathroom and saw something, well, not very pleasing.

There were the little soaps, the small bottles of shampoo and shower gel…

…and the loo roll holder. Well, the loo roll had that welcoming pleat a well-organised environment often sees fit to make for you nowadays. All as you would expect….

. ..except that the pleat was at the bottom of a very small roll indeed. The end of a roll you could. say. What you would ordinarily expect a hotel employee to throw away….

There was a new roll on the shelf, of course, with its ornate pleat in place, and when my friend and her husband left to go out the following day, another was already in place on the holder.

But when they came back at the end of their day, the new fat roll was back on the shelf! Staff had clearly re-pleated another `end` – a roll with not much on it – and placed that on the holder.

They left the hotel the next day as planned, because it was a holiday of visiting here and there. Not because of the loo roll. Not because of having to use, as my friend sensitively put it, ‘someone else’s leavings.’

Where on earth had they got that second small roll from? From another room, newly vacated, where the previous occupants had left behind a roll used down nearly to its end?

Strangely enough, I do not, as my friend does, see that as the height of meanness. I simply see it as good business. Especially in these straightened times. Using up the ends of rolls instead of throwing them away, after each guest, and putting a new fat one nicely pleated for the next guest, could make the difference between the hotel sinking or swimming. Going out of business.

What I was surprised at was that they saved their pennies and cut their corners in such a public way. Why did they not use up the small rolls – the very small, the three quarters, the hardly used – on members of staff?

They would have staff cloakrooms, wouldn’t they? And other staff? Management, reception, kitchen, bar, and probably many more. Outside maintenance men? And of course the bedroom servicers: the depositors of these offending articles, those switchers of fat loo rolls to skimpy mean ones – and then the adding of insult to injury, by neatly pleating them!

My friend’s holiday tale reminded me of a book I once read in the Seventies. It was about housewifery in general, and one section was on money saving. The author’s message in one instance was to be very careful. To be penny pinching, whilst appearing to be plush (or do I mean flush?).

The author warned against placing those little slivers of soap in the bathroom, the cloakroom, the bedroom hand basin….

Now I agree. I find those flat little ends of soap more offensive than I would the small loo roll (so long as he had his big fat big brother on the shelf beside him).

I find people I know who leave such such scrappy little bits of soap out when people are coming, often have several of them in a dish. All a bit grubby, and sometimes even rather slimy…

No, that author said we should always put out unused bars of fat and shiny new soap. Especially for guests.

But, remember, this lady back in the seventies was writing about economy. Those thin little apologies for bars of soap, she said, we should collect together in a margarine tub with a little water until it formed a firm lump . She claimed you could use this for all sorts of household cleaning…

So, if the question had come up and she had lodgers or a small guest house, I guess she would have advocated lots of new loo rolls on display – while you used up any near finished ends for cosmetic tissues and the like.

But my friend’s hotel loo roll disgrace also reminded me of the scraps of soap story, which in turn reminded me that you once got that kind of book. The author was not very well known. But there was a corner of my local library where there were just ordinary life books like that. Books – possibly one-offs – written by people with their own life to share. Their hobby. Their job. Books like what it was to be a postman. That kind of thing.

Now all books have to fit into some kind of genre, don’t they? History, Mystery, Murder and Love…? And of course books about the Famous…

And what could be more important than the jolly old toilet roll?

And as fat as possible, please!

In Neverland, Brenda knows all about economy. And using up bits. Her mother is not the best manager in the world (though with four children and one more on the way, who could blame her?) Brenda has to manage for her, so when she brings a school friend home to tea and finds that Mum is still out and there is nothing to offer but stale bread – well, she manages to make the best use of it and braves it out. She is a coper, using acting and bravado (and sometimes white lies) to get her through difficult days.