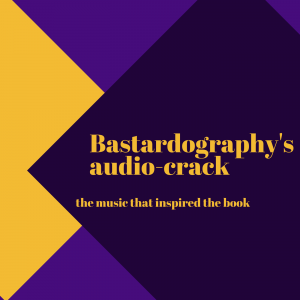 During the writing of B (lets just call it B, you know I’m talking about Bastardography when I say B, yeah?) the inspiration to keep focused and to keep writing about difficult personal experiences often came from songs.

I thought I’d share them with you in no particular order, although I would say some tracks resonate with certain moments more keenly than others. Some also acted as a way to get back to certain points in my life and remember the way I felt and the thoughts I had. Some are just rocking tunes that inspire creativity.

So here’s the Bastardography playlist:

When I was being verbally abused and physically treated for being gay on ‘the estate’, I would imagine I was in some music video, lip synching to Little Bird. In my mind I could see myself walking triumphant, in top-hat and tails, down to the train station, which in reality I had to run, hood up, in order to not be seen by the local gangs. Listen to the lyrics they fit quite snugly.

This song was played ad nauseam during my toddler days, my mum (moom) used to dancersice to this in the living-room whilst I watched on in mock-horror.

8. Colours of the Wind – Pocahontas

Shudder, forever linked with the first panic attack I had brought about by the realisation of my own mortality in the Sutton UCI!

The song that I listened to on the bus to my ‘special school’ after I left my secondary school, this is full of romantic longing of wanting to be in love and having lots of love to give with no recipient in sight.

6. Back To The Future Main Theme – Alan Silvestri

A balls to the wall song of creative empowerment. I love the entire composition, it gives me goose-bumps it truly does. It’s the speed, the insanity of strings and horns, it’s mesmerising, and it makes me feel like I could write anything. Also it was one of my songs when I was asked to pick 5 songs that made me feel confident as part of my CBT therapy.

Another bit of fun, this is more of a post-writing audio rub-down. I am a huge Doctor Who fan, and the lyrics to this song talk-sung by Pertwee along to a psychedelic composition of the theme-tune is delightful, if ridiculously campy!

A brilliant, inspiring, satirical and emotionally truthful song about human behaviour, in a new composition, this closed the first proper play I put on in London called ‘Consenting Adults’, but I often listen to it just to remind me what well made non-compromising art is!

1. Anything Can Happen – Ellie Goulding

This is the song that signified by return to the world of the living. I was recovering from a nervous breakdown in early 2013, and it was when I could enjoy this song and notice that I enjoyed it, that it was music to my ears, I had tears of joy in my eyes.

(For anything else see Enya, Bowie or the theme tune to Blockbusters)